The beginning of Ever Forward

Welcome to the Ever Forward Devlog from Pathea Games.
We'd like to take the time to share our journey with you, about what Ever Forward is, how it came to be, and hope that you enjoy sharing this journey with us.

Originally titled PROTOFORM; we started with the goal of creating a pure puzzle game, and from the get go, we worked extremely hard to make our puzzles feel good. Our first major milestone was reaching a point where we liked our puzzles, felt like they were not just unique among puzzle games, but also unique from puzzle to puzzle within the game.

Here’s the shot that started it all: 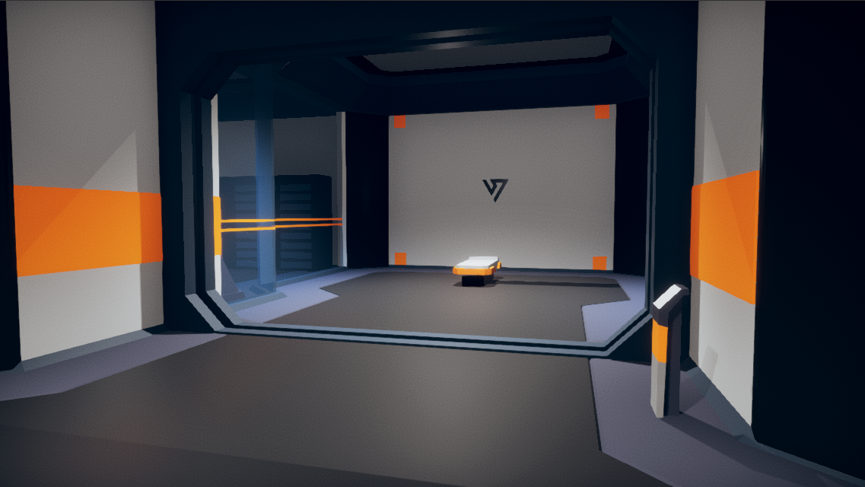 Developing the puzzles was the first step, but it became clear to us that we needed more than just pure puzzles to make the game really stand out. We started writing the script then, it was all very basic at that time, but the idea of a mother and daughter, themes of controlling and being controlled, these were all there from the beginning.

We, like pretty much every other puzzle Dev team were inspired in no small part by the 2007 hit, Portal. The one issue with that being… Portal came out in 2007. Though we didn’t feel the need to greatly innovate graphically for the puzzle genre, since Portal, there have been plenty of other breakthrough games in design: Journey, The Witness, What Remains of Edith Finch, just to name a few. These games, among others, represent a vast evolution of game design philosophy, and we didn’t want to be left out.

A few things we took away from the success of all these games were: a good single player game has its story woven directly into the gameplay, separating the two was unacceptable, and a simple, linear experience with no world-building wouldn’t be tolerated either.

In the beginning it was hard to see the forest for the trees.

Our first versions of Protoform were… alright. But we felt like we were making a silent film in the era of modern blockbusters. We committed some of the very sins we noted and promised to avoid at the beginning of the development process: our puzzle gameplay felt completely disconnected from the story. Locking all of our puzzles in a Portal-like lab interior was confining and boring. Overcoming technical problems, design issues, graphical issues, we now think of Protoform, and the metal laboratory in which it was set, as the cocoon from which Everforward emerged.

Our first attempt at breaking out of the cocoon was with an over-world like what you see here: 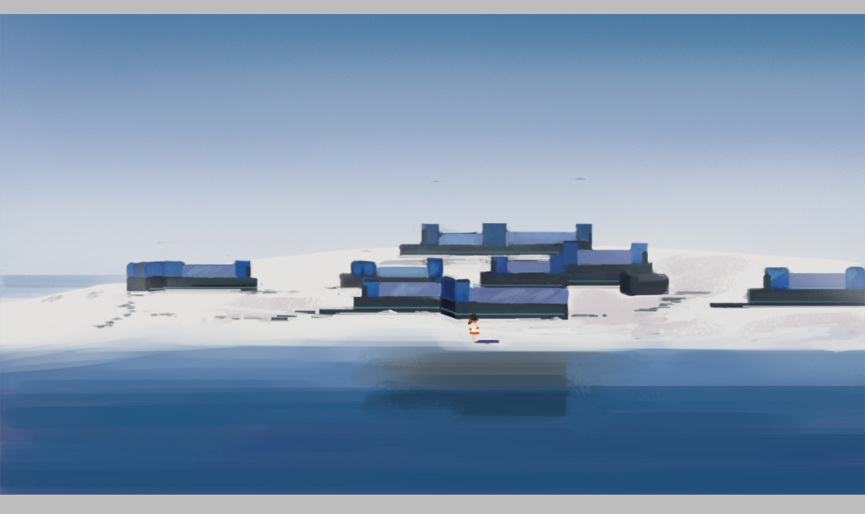 The idea here was to create a duality of freedom and confinement as players solved puzzles and made their way through the game. Ultimately, this over-world idea was scrapped, however the aesthetic ended up being something we’d hold onto all the way into the final stages of development.

The problems with this over-world were numerous: the open space was too nice and made players hate the puzzles. Our script was linear, which made the whole “open-world” aspect meaningless. There was nothing to do in the over-world except awkwardly move between the puzzles. And finally, a somewhat minor issue, some of our puzzles taking place in strange spaces didn’t really make sense on the map.

Then there was our protagonist to think about. Being a 12-year-old girl, she’s not capable of much in the way of acrobatics. No tomb raiding or assassin creeding for our little puzzle solver! This, however, led us to worry that playing as our character wouldn’t be exciting or stimulating enough.

We tried adding a few things to make our protagonist’s physical gameplay a bit more high-octane: we gave her some high-winding vines to climb; unfortunately as we tried to affect the intangible pacing of the game, we found it impossible not to disrupt the actual speed of gameplay; in order for our hero to feel right, we couldn’t let her climb up the vines too quickly, it felt too dissonant packaged with everything else we’d made so far. 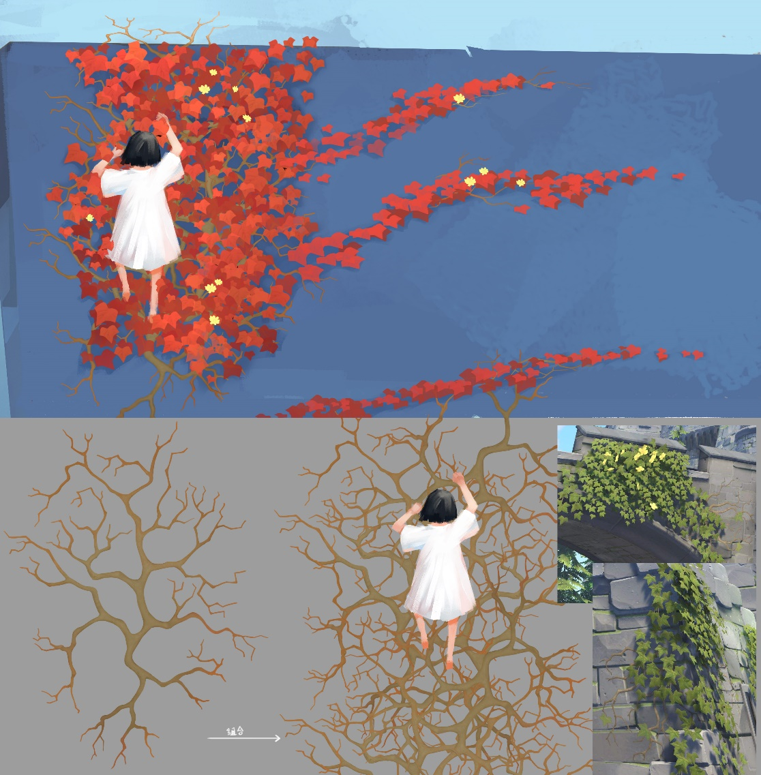 Then we thought of another classic, Shadow of the Colossus. Maybe we could make this thing into a boss rush! That’d keep things exciting. 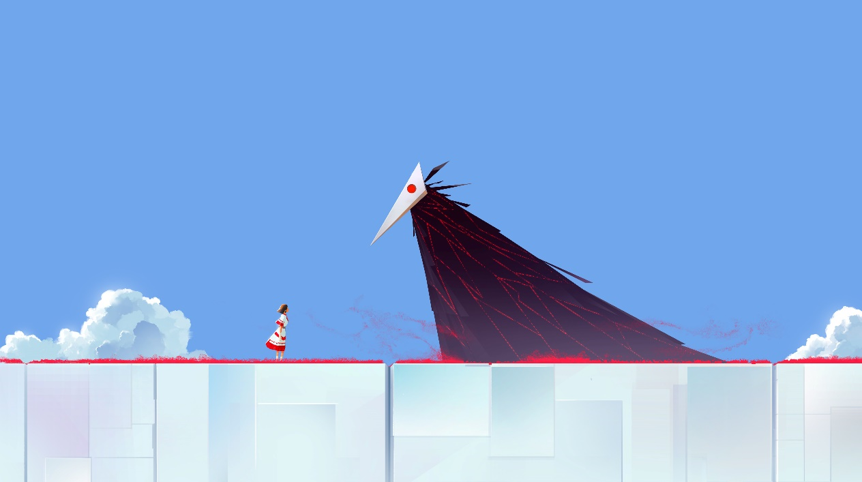 This didn’t really get anywhere, though, sadly. With our core design, the block/stealth/motion puzzles already in place, we found it impossible to tie everything together. Having a game consist of block puzzles followed by boss fights once again felt way too dissonant. Furthermore, coming up with a bunch of interesting boss fights would prolong development time indefinitely, and early attempts just didn’t feel good enough for us to want to go in this direction.

This was the next stage of concept design for our maps, referred to among the team as, “铁憨憨,” or something like “blockhead.” 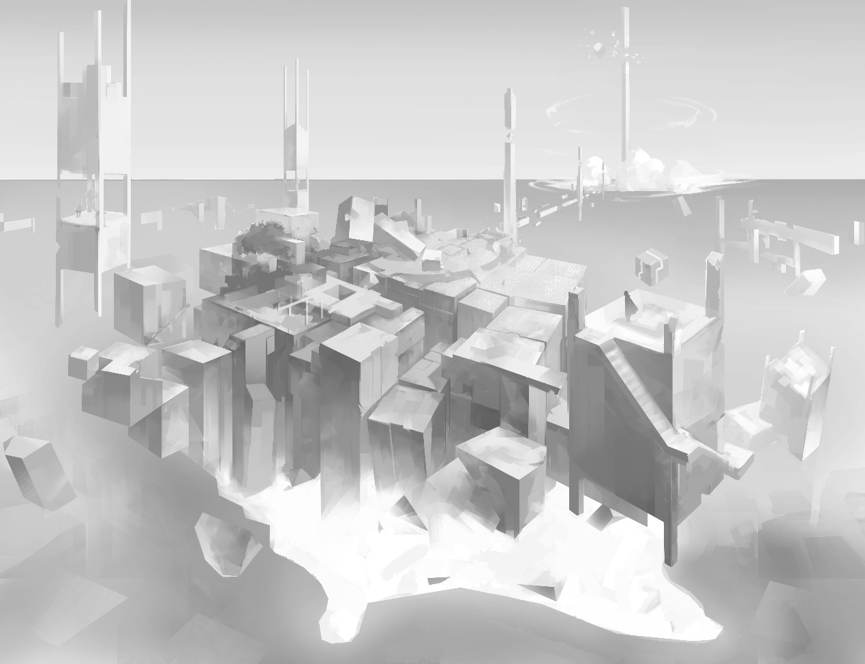 But the Journey wasn't over yet. There was still more to do...

Thank you, Pc demo coming in the up next few weeks, stay tuned to our channels for more informations